Dear Friends,
It's been quite a while.  I started this blog with high hopes, and then the real world got a bit too overwhelming.  I've always meant to come back.  I'm not ready to pick up the detailed chronological investigation, but I'll try to give you an historical tidbit now and then.

Recently, my friend, Karey, asked me about the origin of the "classic wheel."  I didn't know, and that led to digging out some of my old notes. 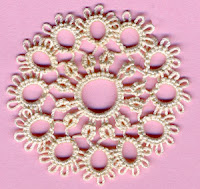 The earliest example of this wheel that I can find is in The Pearl Tatting Book, 1867, by Riego, in the pattern, Lappet Headdress.  Does anyone have an earlier sighting? 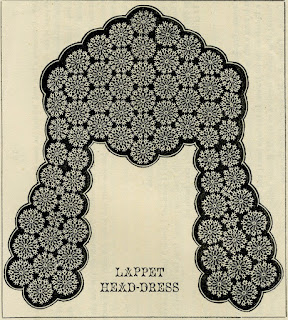 Here is a close-up of one of the wheels in the simplified engraving. 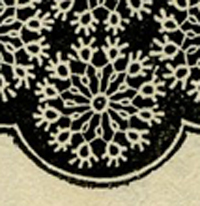 The instructions aren't as clear as modern patterns, but better than many earlier ones.  I think it is so interesting that she ties the threads in a mock picot instead of cutting the threads after the center ring  -- a very early case of trying to cut down on ends to finish off.  Too bad she didn't have the split ring for climbing out as we do today.

A note on terminology -- Riego called them "large stars,"  but we know them as "wheels."  From my quick digging through sources, it appears that later in the 1800's the term "wheel" was used for any small round motif.  As this motif had staying power as the most popular wheel, while others fell into disuse, we began to think of it as The Wheel, or the the "classic wheel", as dubbed by Elgiva Nicholls.  Karey has also seen it called a "snowball," perhaps a later terminology.  Can anyone cite sources calling it that?

You can get a free download of The Pearl Tatting Book, and many others at the Antique Pattern Library HERE, or Georgia's Online Archive HERE.

Thank you for sharing your research! I never have paid much attention to the antique patterns, because I find them so difficult to follow. I guess time and patience are the keys.

Nice to see you back, how interesting about the wheel, thank you for doing the research into this

Thank you for sharing this interesting information, it's always a pleasure learning from your research. I think there are similar, but not the same, sort of wheels also in the "infant's cap" showed in the article from 1851, from The Illustrated Exhibitor", at this link: https://digi.ub.uni-heidelberg.de/diglit/weltausstellung1851d/0225/image

Ninetta, thank you for the link. I will follow up on that.

In 1851 there was a Great Exhibition in London (Great Britain) where Mlle Riego received four awards for her work. Also there were samples of tatting from Ireland on display. As tatted chains had not been developed in 1851, it is safe to presume that this Irish lace was single-shuttle work and could have included rudimentary circular motifs......wheels.