Last time we finished looking at Mrs. Gaugain's tatting section from The Lady's Assistant of 1842.

The next English book to contain tatting (that I know of) was The Ladies' Work-Table Book of 1843. Its tatting section is reproduced below, click to enlarge. 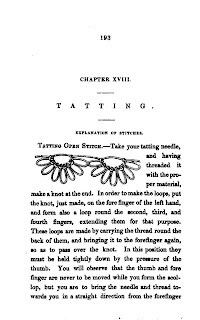 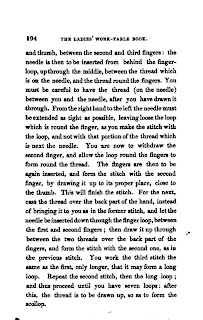 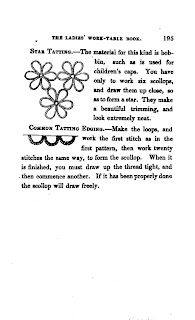 Look closely -- this is nothing more than a simple paraphrasing of Mrs. Gaugain's work with the patterns in reverse order!


Later that year, The Ladies' Handbook of Millinery, Dressmaking and Tatting was published.  I have not found a copy online, but Elgiva Nicholls' excellent Tatting: Technique and History has a thorough description.      The preface includes the statement: " This kind of ornament for childrens's and other dresses was once in high repute, and again appears likely to become a favourite..." This is the first of several assertions that tatting was an old craft now enjoying a return to popularity.  But the tatting patterns given, "Tatting Open Stitch", "Star Tatting", and "Common Tatting Edging" are again the same as Mrs. Gaugain's work.

It is not until 1846, with Miss Lambert's The Handbook of Needlework that we see a new, though meager,  description of tatting tucked into the Netting section of the book.  She uses the word, shuttle, instead of needle.  Only one stitch is described.  Was her description so abbreviated that she did not make clear that there were two movements for the double stitch, or is she describing only the single stitch?  You may draw your own conclusions, though I think the picture looks a bit like Josephine rings. 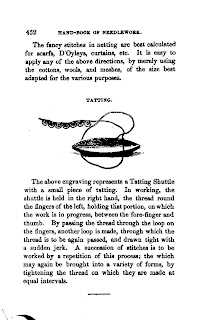 Now at the end of the 1840's we stand at the brink. The new decade will bring revolutionary changes that bring tatting much closer to the art we know today.

My deep apologies for the long delay between posts.  Things have been hectic and unpredictable, but should be settling down now.

Thank you Martha for the history. It is interesting to find all this out.

Enjoyed your post, I look forward to these...no matter the time between :-)

interesting, I love the history of tatting.
Thank you for teaching history.
I hope to continue jijijijijij .... .......
thank you very much

Very interesting post, you are finding so much on the history of tatting. Thank you
Margaret